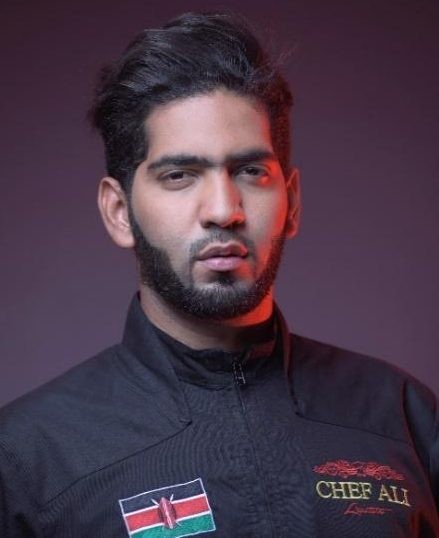 Kenya’s Chef Ali Said Mandhry popularly known as Chef Ali L’artiste, is a Celebrity Chef, TV/Radio personality, culinary instructor and food stylist. Born in Mombasa, Ali discovered his love for cooking at the age of nine by cooking with his grandfather. Ali was inspired by Bil Hana Wal Shifaa, a cooking show that showcased Arab Cuisine and decided to teach himself to bake. In no time, he began earning his pocket money by taking orders for birthday and occasional cakes from his primary school mates, friends and neighbors. Following high school, Ali started work at the Sarova White Sands Beach Resort and Spa as an apprentice chef before enrolling in a food production apprenticeship at the Kenya Utalii College. After graduating, Mandhry pursued a career as an artistic chef to follow his passion for sugar artistry, pastries and cakes.

His aim is to inspire and educate people with the new trends in the culinary world. Chef Ali develops, writes and shares recipes on blogs and videos online so as to teach people how to cook. He has appeared on a number of TV and radio shows such as ABC The Chew, CNN African voices, Dubai TV, Hosted Pilipili Jikoni, Tamu Tamu on NTV kenya, kikwetu supa Chef on k24, Food Time on Pwani TV, and Celebrity Kitchen Raid on Zuku Entertainment. He currently co-host’s power breakfast Live on Citizen TV every Thursday preparing meals live on set for the third year on the row. To date, Ali has filmed and hosted over 100 episodes of his own TV cookery shows on several broadcasting networks in Kenya, East/Pan Africa and globally. Chef Ali writes a weekly recipe column for Eve magazine published every Saturday as a pullout magazine inside the standard newspaper.

Through his career, Ali has worked both national and internationally to champion Kenyan cuisine. In 2011, Ali started a project that trained young chefs at Kenya Utalii College on pastry presentation as well as developed the “Basic Food Presentation Skills Course” that refined the presentation skills of hotel industry chefs in Kenya. Recognizing his work, Ali has been named among the top five reigning chefs of African cuisine by Africa Style Daily as well as vote number 1 chef on top 10 list in Kenya. He was also the first African chef to win the International Hall of Fame Award (USA) and serves as Kenya’s Chefs Global Ambassador. Ali has also been part of IFAD’s Recipes for Change campaign, a project in which chefs highlight the need for smallholder farmers to adapt now to climate impacts to protect their food security.